In South India, the conversation seems to always turn to Dengue. The neighbourhood hospitals are overflowing with dengue cases, and sachets of Nila Vembu Kashayam (a herbal remedy against fevers) are being sent home, as per government instructions, in my 5-year-old’s homework diary. Offices and factories are reeling under a wave of absenteeism as workers fall sick or stay home to take care of a loved one. India’s productivity, already low, is being dealt a further blow by the bite of a small, fragile, female Aedes mosquito.

Dengue is a mosquito-borne viral infection characterised by high fever, excruciating pain (since I’ve had it, I can vouch for this), an angry red rash and sometimes, vomiting. One of the original names for dengue was “dandy fever” because the West African slaves who contracted it walked mincingly like dandies because of their extreme joint pain. The more serious variant is Dengue Haemorrhagic Fever, which can lead to bleeding and death if not given prompt attention. 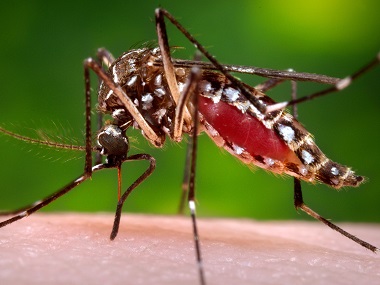 There is no cure for Dengue. The disease requires careful monitoring and care. Leading Haematologists say that drinking plenty of fluids is best practise.

The virus is carried by the female Aedes mosquito who requires a blood meal before she can lay her eggs. She can contract the virus during her blood meal, incubates the virus, and if she lives long enough, passes it on during her subsequent blood meals. This is the only way the virus is transmitted. Aedes females are day-biting –  using a repellent in the day and wearing appropriate clothing can go a long way in not contracting the disease.

A female typically takes her first blood meal 3 days after emerging from her pupae. In a life span of less than a month, the key determinants of whether she transmits dengue are: does she get infected by the virus and how long does it take her to become infective? The first depends on whether there is dengue present in her surroundings, and the latter, surprisingly, depends on the temperature.

A-ha. There is the climate link. The time taken for an infected Aedes female to transmit it to her next victim is dramatically shortened as the temperature increases. This period almost halves from 9-15 days at 26-28°C to about 5-7 days at 30°C. One study shows this time falls further as the temperature rises beyond 30°C.

Let’s do the Math quickly: The Aedes females hatches, 3 days later she feeds off someone with dengue. She’s infected. It’s hot (> 30°C) – and so, by day 9, she’s a dangerous vish-not-quite-kanya. Given a life span of 25 days (this is affected by a combination of temperature and egg-laying), she has a good 16 days to infect someone.

What if it’s cooler?

If young Ms. Aedes is born somewhere with an ambient temperature of 26°C? She hatches, 3 days later she bites someone with dengue. But then it takes her anywhere between 9-15 days (or never as per one study) to become deadly. That means, she would have only 10 days to infect someone.

The current warming has expanded the range of the Aedes mosquito to more temperate climes (more of the US and Europe), taking diseases like Dengue and Zika with it.

But isn’t there something as too hot?

Possibly. Mosquito babies develop more slowly above 34°C and there is some evidence of increased mortality above 40°C. But remember these are urban mosquitoes who typically bite indoors, where temperatures in the shade can be much lower. Laboratory studies are not quite as useful for wily mosquitoes intent on living.

But temperature alone does not reveal the whole picture.

Rainfall is literally manna from heaven for Dengue. Mosquitoes need water to lay their eggs in. Without that moisture, the eggs will not develop. When it rains, especially when it is hot, the humidity of the air increases. Mosquito feeding, survival, development all receive a boost when that happens.

Paradoxically, drought can trigger dengue epidemics as well, but perhaps not in the way you might think. People store water during drought or when water supply from the municipal corporation is irregular. Mosquitoes love this – the water containers in each house provides both a cool place to lay their eggs in close proximity to feeding grounds – the arms and legs of those creatures (us!) that drink the water!

There is one more piece to the puzzle.

When rain falls on an open surface, some of it evaporates, some of it enters the soil, and a large quantity “runs off” along the slope.

Not so in our cities. Look around you – especially if you are a city dweller.

Rain falls. Some of it evaporates, if there is soil, or an unclogged drain, some of it disappears below ground, some of it fills the convenient little pockets that unmanaged solid waste creates, and much of it pools, because the drains and canals are often clogged with waste. Rain combined with solid waste provides convenient scattered, nutrient-rich mosquito-nests.

A-ha! There is the waste link.

The pools of rain water and million tiny pockets of water all form inviting homes for the female mosquito to lay her eggs, thus giving rise to the next generation of unfriendly neighbourhood killers. Mosquitoes can breed in pockets of water which are about the size of coin. This is important – a female Aedes mosquito has a flight range of about 400 metres – which means neighbourhoods can take the initiative of keeping their own surroundings clean. Dengue is, to use start-up slang, a hyper-local start-up, with solid waste providing its seed funding.

The Emperor is naked

But we, as a society, have not come to grips with this problem.

Every doctor I have spoken to has spoken, in strong terms, but off the record, on the level of underreporting in Dengue cases. This is important because names hold great value. Calling the fever by its appropriate name: “Dengue” gives the problem a name. When the numbers add up, they can serve as a strong call to action.

To understand the extent of underreporting, consider this:

No, no. One might argue. Dengue is an urban disease. India is primarily rural.

Let us take Tamil Nadu – reasonably urban and hard hit by dengue at the moment.

Tamil Nadu has reported 11552 cases up to 5th October this year. Since I do not have the breakup, let us for a moment assume that 80% of these cases were reported in the cities of Tamil Nadu (this makes for a highly overestimated risk – only makes the point I am trying to make stronger). Given Tamil Nadu’s urban population of 35 million, this translates to a 0.026% risk of dengue in Tamil Nadu’s cities in the midst of a raging epidemic.

Singapore is far cleaner, and far stricter about water stagnation than India is. Singapore has taken data collection, analysis and action to great levels (check it out here: http://www.nea.gov.sg/public-health/dengue/dengue-cases) and consequently brought down the risk by 80% in 2017.

We, on the other hand, want to pretend the problem does not exist, both with outright denial and rampant underreporting.

This is not way to surmount the problem.

What needs to be done?

Because, you see, the problem has been conquered elsewhere.

Dengue existed and caused epidemics repeatedly in Europe and the United States in the 19th and 20th centuries. Today, they have all-but-disappeared. The climate has warmed, but dengue has not taken a significant bite. Cleanliness – i.e., management of solid waste, can certainly claim an important role in that progress.

In India, while there is not much we can do about the temperature or the rain, we can do something about the waste and our water storage. In the past few years and days, when I have spoken to Waste Managers in the Public, NGO and Private sectors, they all say the same thing: we, the public, are unwilling to segregate or pay enough for effective collection and management of waste.

Humans as a lot care more about losing something, rather gaining something. Two Nobel Laureates in Economics, including this year’s winner, won the prize for this insight. Perhaps, getting to clean cities should focus more on not losing our lives to Dengue rather than gaining a wonderful city to live in.

What can I do?

A leading Chennai haematologist told me that patients report corporation workers do visit the houses where dengue is reported and take countermeasures.

Prevention is always better than cure: this is something we can do proactively: Search for pockets of stagnant water and remove them. Typically, this means ensuring waste is collected and managed. The Western world and Singapore have shown that community action against waste can help win the war against Dengue.

If we want to solve our dengue problem, managing our waste is probably the best place to start.