We began this mini-series within the column by talking about the Gujarat and Assam floods.

Little more than a month ago, large parts of Gujarat and Assam had been inundated by water, and lakhs of people had been displaced.

Between then and now, Bihar has been devastated by the floods. Parts of Bangalore have been ravaged by floods. At the time of writing, Houston in the US has been flooded and closer to home, so has Mumbai. Google maps shared on WhatsApp groups show an angry sea of red, as commuters wonder how, and whether, to get home.

If there was ever a lesson that there are no moats to hide behind in a warming climate, one would think this is it. But humanity, it appears, has unique and endless stores of denial and imagination. Witness this tweet by Anne Coulter, a conservative commentator, on the Houston floods: “I don’t believe Hurricane Harvey is God’s punishment for Houston electing a lesbian mayor. But that is more credible than “climate change.””

The many people I have spoken to in the past few years have agreed that it will take a major catastrophe for society to change meaningfully.

At least 24 million people have been displaced in the floods in South Asia.

More than 1000 people have lost their lives. Each death has been unique, and a tragedy.

* No totals have been given because there have been deaths and people affected in other states as well.

The bill for damaged properties, trauma, lost lives and scattered memories can stretch over thousands upon thousands of crores.

By any definition, this set of events should be fall under the title of major catastrophe.

Not so in India. Hold the thought – we will come back to it soon.

The silver lining to this catastrophe is that we saw, in the last article of this series, our societal choices have at least as much of a role to play as does climate change in the tragedies that unfold before us regularly. This means the action is well and truly in our hands.

So, what is stopping us? Why are we not acting? Why, if anything, are our choices taking us in the opposite direction?

For one, as we saw last time, too many of us have far too little skin-in-the-game. Whether it be the very poor, who contribute little to the revenues of the state, or the large middle class, that doesn’t vote, and does not partake greatly of what society has to offer, or the rich, who live in cocoons. Many of us don’t see society as “ours”. We don’t believe we have certain rights and we don’t acknowledge our responsibilities.

As a result, we have a societal contract where a large group of people have very little direct control over the services they receive from society. They, like Muniammal of the last column, strike an unholy bargain with the politician. This gives the politician tremendous power – some of which is used to avariciously exploit the commons – our shared environment. The system that has emerged works well in granting favours, not providing consistent, accountable service. This works well also for another group – the Rajeev’s from the previous column – the powerful – who gain by trampling on the commons. The middle class is distracted by their smartphones and their regular feed of stories by news channels.

The good news is this: India is slowly becoming wealthier – especially in her cities. This means what they want from the society, and by extension, their politicians, is likely to be different. And two, climate change casts a bright light on the fissures in our societal contract and the ways by which our coping mechanisms have been damaged. You cannot keep throwing rubbish in the drains once you know that intense rainfall is going to become the order of the day. Or you cannot allow leaks to persist, when droughts become much more common. The demands of the big groups of voters is changing: no longer is a favour enough, they need systematically good service. The rich cannot remain aloof and the middle class cannot remain indifferent, because the flood waters are affecting them as well.

So how do we enable a better equilibrium, a more effective social contract?

The good news is that we have the law in place: The 74th Amendment to the Indian constitution requires states to devolve power to the cities. A quarter of a century has passed since the amendment and yet, less than a handful of states have taken meaningful action in surrendering power to a municipal authority. Why should they? The voters in the cities haven’t made it an issue. Why give up power when the other side is not asking for it?

De facto, power and responsibility is shared between a Mayor, the MLAs, the MPS, councillors, collectors and commissioners. When there are so many desks where the buck can stop, accountability, decision making and incentives all suffer. This reinforces a system that works well for favours and ad hoc-ism rather than systematic delivery.

One reason pointed out for not devolving power is lack of talent. But, India has good senior talent – in the public sector, in the private sector and in her diaspora. Allowing for lateral entry at senior levels in city management can make a world of difference in outcomes.

What is stopping us?

The real bottleneck is not talent, it’s not the law, it’s the citizen apathy.

Democracy is a contact sport, folks. You need skin in the game. Participation is NOT optional.

There is a popular adage: the crying child gets the milk. Lobbyists and protestors swear by it. India is a land of protests. Indeed, a particular state is renowned for holding protests on Mondays or Fridays to stretch weekend time. But a quick survey of our recent protests shows where our priorities lie: Farmers for loan waivers , For and against the cow and cow-related violence, against an arrest of a convicted rapist/spiritual leader, against GST, for reservations.

When is the last time we heard of a protest for the implementation of Amendment 74?

Big surprise that city governance is not improving.

This needs to change. That’s entirely in our hands. Our preferences. Our choices. Our protests. Our vote.

Flooding (and its fraternal twin sister, drought) must compete for attention with cricket, a godman’s pillaging followers, his sex life, a super star and Game of Thrones. For many of us, focussing on the competition is so much more fun. And besides, there is the age-old mental voice saying:

Perhaps we should consider that any change in the history of mankind has come about because a small group of people believed they could do something about it. Indeed, that’s the only way for change to come about. Cities around the world have shown that groups of people have taken the initiative to solve their own problems. And it has worked.

But we need to be concerned. More than we are today.

You may be thinking. Rubbish. Of course, we are concerned about the floods.

Let me share a Google Trends comparison I ran between “Floods” and other issues in India. 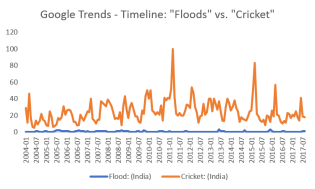 Our preferences suggest that, as a society, we are concerned with first-world problems while living in a third-world country. We do not have the luxury to that – especially in the face of a warming climate.

Some of you may ask: Has concerted action by concerned citizens worked?

We got our Independence that way.

Nearer to today, and smaller in scale, Bangalore has a thriving ecosystem in solid waste (which we shall explore deeper later) because of this. Johannesburg turned its finances and functioning after it made significant governance reforms.

As long as our current preferences continue, an Indian game of thrones with Rajinikanth playing Ned Stark and overcoming the Ice King and having a dragon dance with Danny is more likely than effectively adapting to climate change.