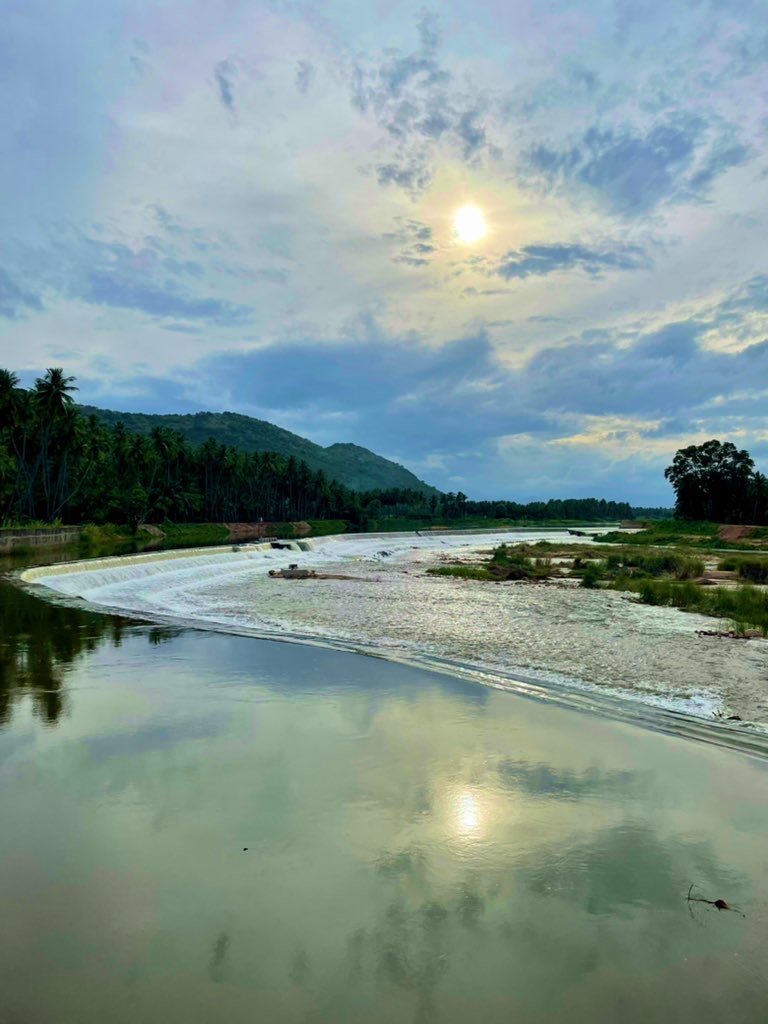 The opening scene of Ponniyin Selvan (the book) sees protagonist Vandiya Thevan riding along the Veera Narayana Lake, which has filled up when the waters of the Kollidam arrive in early August. The lake or tank was built by an earlier Chola emperor to capture the seasonal waters of the Kollidam or Vadakaveri. The annual rainfall of the region is less than 1000 mm – far too little to water the rich paddy fields whose harvests delivered the wealth of the mighty Chola empire. The eri or lake was a way to store the seasonal water and promote irrigation that could support a rice crop and was crucial to the wealth and might of the Chola Empire.

As I wrote earlier, ‘Tanks are brilliant. They work in two ways – one, they collect rainwater from whichever area they directly drain, and allow the rainwater a chance to percolate into the ground, rather than ‘runoff’. Second, a subset of tanks, called system tanks, or system ‘eris’ are connected to a network of other tanks and to the river through canals. These system tanks are the beneficiaries of surplus non-local rainfall.’ Veeranarayana Eri or Veeranam Lake as it called today is such a tank.

Another example of ancient water engineering is the anai or check dam. While the Kallanai is the well known example of Chola water engineering (I’ve written of it and its fabulous engineering in my book), its more humble sister, the Sitranai has its own magnificence and tale to tell. Elegance is usually a testament to understanding, and the stark simplicity of the design of the Sitranai speaks eloquently both about the deep understanding ancient Tamil rulers possessed of river flows and a philosophy that made them work with the waters rather than trying to re-shape them.

The Sitranai (literally small check dam) is a gently semi-circular granite check dam built across the Vaigai near a village called Kuruvithurai, an hour’s drive from Madurai. My husband and I drove on a narrow well-paved road cleaving through rice fields and coconut farms, until we came to a dirt track veering towards the river – there was no signage. We turned right, and within a minute came to the Sitranai. It was twilight and the granite glowed a pale peach in the rays of the setting sun. The massive dam arced across the river, the water cascading down it sides. There were people bathing in the foaming cascades while small white birds hovered over the water, searching for fish.

The dam’s position (it has been cleverly built in a place where the river takes a sharp turn) and design help with both functionality and avoiding maintenance.

When I asked Dr Srinivas Veeravalli of IIT Delhi, who, along with his student, Dr Chitra Krishnan, has studied ancient water works, on how the dam worked, he told me, “When the river takes a bend a radial pressure gradient is set up to provide the required centripetal force. Near the bottom of the river the velocities are much lower, and the pressure gradient causes a radially inward secondary flow [which] carries silt towards the inner bank. (For completeness there is a radially outward secondary flow at the surface.)  That is why the canal system is relatively free of silt.  In a flood situation, since the anicut is built at an angle to the main flow, it allows the flow to pass over it at higher velocities (compared to a weir built straight across the river) and hence the depth of the river is relatively low, thereby reducing the damage.”

Simply put, ancient Tamil engineers exploited the natural water dynamics of the site to keep the canal system free of silt, manage seasonality and reduce wear and tear of the dam. In other words, they worked with water’s nature – very different from later British constructions, which were based on a far shallower (pun unintended) understanding of local hydrology and sediment mechanisms. The angle also means the force of the incoming water is lower as it strikes at angle rather than full on – meaning the dam is long lasting. The granite dame has stood the test of time – it was built in the 8th century or even earlier, as a 12th century inscription in a nearby temple says.

To repeat, the dam understands and works with the seasonality of the Vaigai’s water: during low flow times, water is channelled by the dam into the tank system that supports irrigation around Madurai. During high flow, or floods, water passes over the dam into the main trunk of the river. That understanding of India’s water and a philosophy of trying to work with water (as opposed to trying to reshape it) led to the wealth of ancient Tamil kingdoms as showcased in Ponniyin Selvan. That understanding, and importantly that philosophy of working with nature is missing today, leading us to crisis.