Woman’s day is coming up. An annual circus about all things woman.

In this century, I find it funny. A little anachronistic even. Woman’s day. What about every other day? Is it also not a woman’s day?

Decades ago, while working with Asha Cornell, I had an opportunity to visit a town called Usilampatti, near Madurai. There was a group working on female infanticide – a practise where baby girls are killed by their families shortly after birth – and they had organized a meeting with a group of villagers. It was an emotional meeting. Many were quiet. One mother of three boys spoke of how she longed for a daughter. Then one woman stood up and said “I have killed my daughter, give me money.” She believed that we were there to encourage this practise and were making handouts to anyone who practised it. When asked why she felt she should be rewarded for killing her own daughter she replied “My daughter takes money to feed and clothe. Then she studies. Then I must marry her off. The boy’s family, even if the boy doesn’t work and hasn’t studied, will demand a lot of dowry. I can’t meet it. My daughter will only be tortured. Instead of the whole family suffering all the way, simpler and less painful to kill her now.”

While, on average, women live longer than men, less than half of India’s population is female –suggesting some systematic way of eliminating females from the population. There are just 909 girls born in India for every 1000 boys. Worse still, in developed states like Tamil Nadu, the sex ratio is falling. In 2013, there were only 927 girls born for every 1000 boys down from 955 a decade prior[i].

The vulnerability continues as the baby girls grows. She is often less educated: with attendance in school falling steeply as she enters puberty, especially in rural India. In a world where opportunity increasingly beckons only the educated, she has already been placed on the “slower” track[ii]. With the lower education, the rural woman begins her working life with many avenues closed to her.

This vulnerability is compounded when she (and if she) enters the workforce.

For women who do work outside their homes, data from the World Bank suggest wages for women performing casual labour are 20% lower than those received for men and 20% lower for the same task.

An overwhelming portion of urban women don’t work as they enter their marriage and childbearing years. This is a tragedy and an enigma. This is a subject for several books in itself. But a very brief and therefore necessarily incomplete explanation would include cultural factors such as women shouldn’t work and child care. In our surveys, we found the cultural attitude of “Let’s not work” to be pervasive amongst a very large group of young urban women. Many view their jobs as a stop gap between the end of college and the time their parents can match them with a suitable boy.

This reticence to work amongst urban women contributes to India having one of the lowest workforce participation rates in the world. Lower than even Chad, Oman, Uganda and Kuwait! 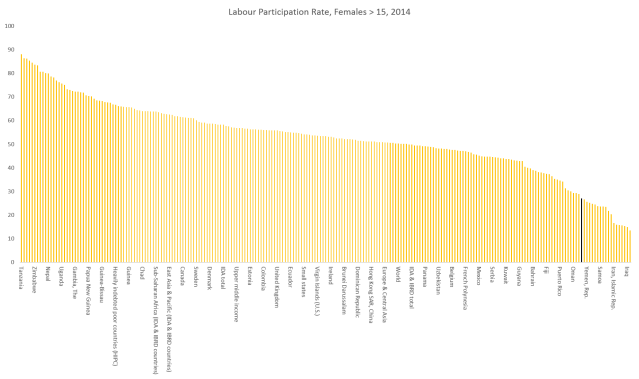 Experts suggest that perhaps this low working rate partially explains the falling sex ratio. Heartless as it may sound, questions are asked on why should parents spend so much on educating and bringing up a girl child, when she contributes very little to the family kitty? Whether we like this question or not, we cannot ignore it.

A warming climate poses many risks to this vulnerable group.

The first kind of risk is the risk to employment. Almost three quarters of the working women in India work in agriculture, often as landless labourers. This group has few alternates for work: either in the form of alternate rural employment (textiles being the notable exception) or the ability to migrate. A warming climate is projected to decimate agricultural yields – this means there will be less “surplus” to pay for labour. Automation will reduce need for such labour. What this large group of working women will do in the coming decades is an important question of our times.

The second risk pertains to the roles that women perform: child and household care. As we saw earlier, both the incidence of mosquito-borne diseases and the incidence of health problems related to floods are set to rise as the climate warms. With children being a vulnerable group, child carers, who are overwhelmingly women, are set for bad time. They will have less time to work or to relax thus reducing their well-being. As the incidence of drought increases, more and more girls must walk further each day to collect water – stealing time that could have been put to school or leisure. Several studies show that as drought increases and the available nutrition available for a family falls, women often forego their share in such scenarios so that their families benefit, worsening their health in the process.

One contributor to global warming on a local scale is the black smoke that emanates from cook stoves fuelled by solid fuels like wood or dung. The black smoke is said to cause warming at a local scale. The tiny particles in the smoke enter our lungs and wreak havoc. Across India, millions of households use such stoves contributing to over a million deaths a year. The bulk of this burden is borne by women who cooks and the babies and children with them.

The third risk is the increase of violence against women. Most incidences of violence go unreported or under-reported. But a death, especially a dowry death, is much harder to hide.

A study by Sekhri and Storeygard[iv] looks at data from 500+ districts in India over the past decade. The authors found that whenever rains fall by a standard deviation, or 240mm in a season, dowry deaths in that district rise by 8%. The authors explain that the groom’s family sees the killing of the wife as a form of “income smoothing”. Farm incomes fall during droughts. Killing a woman and marrying a fresh wife means there is new income for the family. Horrifying as that sounds, it is a plausible explanation for the data.

Studies show that domestic violence reports in the US increase by 7% for every degree C rise in temperature. There is already a cultural tolerance for domestic violence in India. Rising temperatures, could simply exacerbate this risk. With violence against women already making regular headlines, this is a risk we cannot afford to let rise.

Can we do anything?

Providing alternate employment for our rural women is a big action, one we will look at in a later chapter.  Female education remains one metric that characterised egalitarian societies. It has so many positive benefits – lower birth rates, better maternal and childhood prospects, better childhood nutrition. Not to mention the boost the economy would get from having an increased participation of half its members.

There are many “push” solutions today – government schemes that try to educate the girl child. Now we need to add a few pull schemes. If women joined (and remained) in the workforce in larger numbers, the economic argument would work for them to study more.

Urban women who view their job as a stop gap between college and marriage should keep this in mind. As should companies who employ women in creating an environment – childcare provision and allowing for flexible hours – that keeps women at work.

If we want to move forward as a country, we cannot afford to leave half our population behind.

[i] Office of the Registrar General and Census Commissioner, India. (ON647)

[ii] Ministry of Statistics and Program Implementation, Government of India