Imagine 6 kids in a group with a cake to share. The ring leader is older, stronger and eats more of the cake. The others know that equality dictates they should get equal shares, or at least shares depending on their sizes but lack the strength to back up feeble words of protests. Now imagine this cake to be a magic cake – those who eat it are offered a special protection,  but those who don’t suffer when night falls, while the very action of eating the cake makes the monsters come out at night. 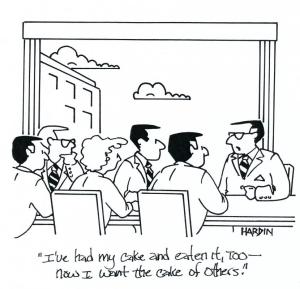 This not-very-elegant analogy is what the climate change puzzle is like.

The climate is changing with the harshest impacts – varying rainfall resulting in floods and droughts, harsh summers, falling agricultural productivity – hitting the poor in the tropics the hardest. They also are the least equipped to handle them – either in technology or just sheer holding power.

The climate is changing because the stock of CO2 in the atmosphere has gone up – because developed countries in the course of their development have caused CO2 to go up. Countries like the US, Canada or those in the European Union are protected from the worst fallout of climate change by their very location. Moreover, their fossil fuel-powered economic development has built technological and economic shields to protect them from pest-attacks, storm surges and errant rainfall.

Let’s delve in a little more.

Plants and animals (and indeed humans!) have an optimal temperature range in which they function best. As the climate warms, growing seasons in the colder north increase – they start a little sooner and end a little later. And the now warmer climate, makes the productivity a little more. While in the already hot tropics, plants can’t take the increased heat in the summer so their yield falls. The broad brushstrokes suggest a fall in yield of cereals in the tropics and a rise in temperate climes. The nuanced view includes water scarcity, pest migration, ecosystem disruption – these in some cases worsen the yield picture for the tropics, and in some cases just cloud the picture.

Fish begin to move to cooler climes – meaning losses for fishermen in India and gain for fisherman in Canada. Take the graphic below – while in the subtropics, cold water fish populations are slowly replaced by warm water fish, in the tropics, it has become too hot for many fish altogether, resulting in lower populations. 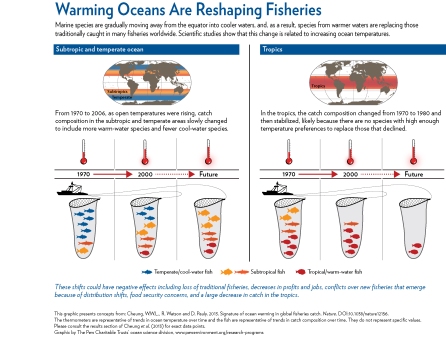 Another impact of climate change is that as the Earth warms, ice and snow that could exist in previously cooler climes now melt. This enters the sea increasing its level. Warmer water in the oceans also cause the oceans to expand, further increasing their level. Consider the figure below again from the guardian. You can see the number of people affected by rising seas is disproportionately in Asia – partly because of their large populations, but also because many more of them live within 5 m of the sea than elsewhere. 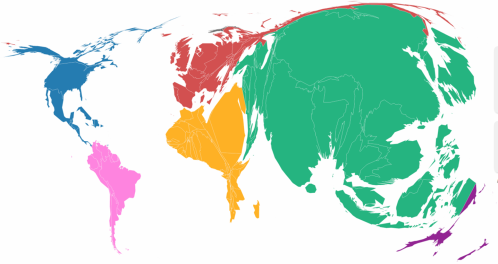 Understandably then, the group of small island nations have been among st the strongest protesters against climate change. As the science becomes clearer, developing countries have become more open to putting curbs on their emissions (something they were resistant to earlier), and developed nations are becoming more recalcitrant.